DALLAS – A Yeti Airlines (YT) ATR 72-500 aircraft has crashed near Pokhara, Nepal. Both YT and the Civil Aviation Authority of Nepal (CAAN) have issued statements confirming the accident, the country’s worst in five years.

The aircraft, with registration 9N-ANC, was operating a domestic flight YT961 from Tribhuvan International Airport, Kathmandu (KTM), to Pokhara Airport (PKR) with 68 passengers and four crew members on board.

The 15.5-year-old turboprop was on final approach to PKR when it stalled and crashed between the old Pokhara and the new International Airport.

According to the CAAN, most of the passengers were Nepalese, although there were also Indian, Russian, Korean, Irish, Australian, Argentinian and French nationals onboard. The CAAN has confirmed that none of the 68 passengers and four crew members survived the crash.

Rescue operations are ongoing, with Nepalese soldiers and rescuers on the scene just one and a half kilometres from PKR.

Footage posted on social media shows the aircraft flying low and slow over a populated area before its tail dips and the aircraft banks sharply to the left. The camera cuts away, but an impact is heard shortly afterwards. Additional footage also shows plumes of smoke billowing from the crash site.

Hundreds of Nepalese soldiers and locals are involved in the rescue operation at the crash site in the gorge of the Seti River, just one and a half kilometres from the airport.

Following the tragic incident, Nepalese Prime Minister Pushpa Kamal Dahal called an emergency meeting of the Council of Ministers and directed the Home Ministry, security personnel and all the government agencies to carry out immediate rescue and relief operations.

“I am deeply saddened by the sad and tragic accident of Yeti Airlines ANC ATR 72 which was flying from Kathmandu to Pokhara with passengers. I sincerely appeal to the security personnel, all agencies of the Nepal government and the general public to start an effective rescue.”

This is a developing story. More updates to follow. 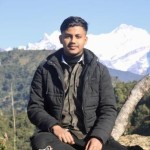 author
Sharad Ranabhat mainly covers feature stories alongside other interesting articles. Having written for Sam Chui, Airlive, Travel Radar, Aviation Nepal and others, he aims to cover as many feature stories as possible here at Airways Magazine.
Previous Post