French Bee Takes Delivery of Its Sixth A350

DALLAS — French airline BF has received its sixth Airbus A350 aircraft. The airline has been expanding its fleet and route network in recent years.

The new A350, the 12th for the Dubreuil Group, BF’s owner, and the airline’s second -1000, will serve long-haul destinations on popular routes to French Polynesia and, if the airline’s A350-900 is grounded, to the West Coast of the United States.

The A350 features a modern and comfortable cabin, with the latest in-flight entertainment and connectivity options. BF offers two travel classes on the type:

Las April, Airways is onboard French Bee’s (BF) inaugural flight from Los Angeles (LAX) to Paris (ORY), a major step for the low-cost airline’s ambitious plans to expand into the North American market. Follow along below as we showcase the inaugural flight celebrations and Airbus A350 inflight experience. 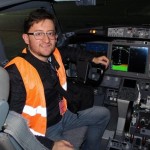 subscriber
Nicolás has been an aviation journalist for 15 years covering Latin American Airlines. Based in Ecuador.
Previous Post