I channel my passion for aviation in a lot of things. I collect models, fly simulators, build up flight hours, collect safety cards, go to camps, take trips, and most recently, write for Airways.

But out of all those things, none defines me as an aviation enthusiast more than being a planespotter.

First and foremost, I am a planespotter. I go to airports in my area and take photos of them with my camera. It is the thing I do most, and one of the things I love most.

A lot of people ask me why I find joy in sitting around -not even inside in most cases- an airport for up to 14 hours a day just taking photos.

It is a difficult question for me to answer, mostly because the people who ask me are not planespotters, but a little because I do not quite know why I love it so much. Hopefully, I will answer that question in this exploration of planespotting.

The US West Coast

I make my home in West Los Angeles, so I am constantly surrounded by aviation. The Southern California area is one of the most diverse areas for aviation. I do not remember a time not loving aviation.

My home airport is Los Angeles International or LAX as it is referred to. I love LAX. It is a logistical nightmare as an airport, but as a small child, the iconic theme building and the colorful pylons and the sheer amount of planes from every corner of the earth never failed to impress me.

I loved traveling as a little kid. It was so exciting to me. All the moving parts that had to work to get a plane off the ground, from ground crew to air traffic control. And me, the passenger, was right in the middle of all of it.

I first went to one of the world’s best planespotting locations, Clutter Park or Imperial Hill, around 2015. The hill overlooks the entire south complex of LAX. 25R departures and the iconic TBIT lineup are right in front of you. I could not believe this gem of a viewpoint had been here this whole time, and I was just finding out about it.

For years, In n Out, another famous LAX location, was capturing my breath, and my hearing, every time a plane landed overhead. 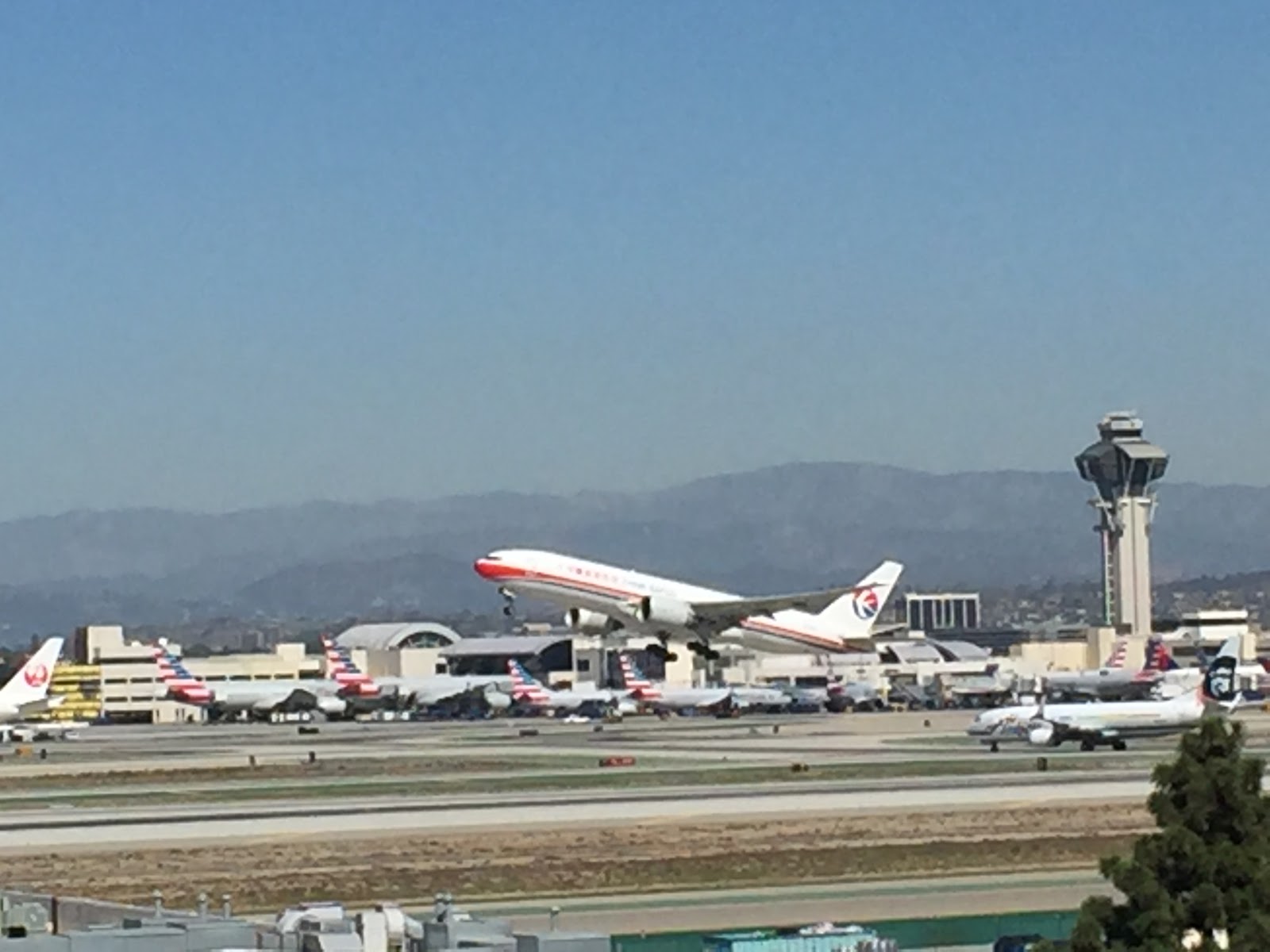 The image above was my first planespotting photo from back in 2015. I had an iPhone 6, and it did not quite capture the aircraft as my Canon 80D does now.

I have sequences that look like stop-motion films on my camera roll from 2015-2018 thanks to my spamming of the shutter button, all pretty much the same quality of the above.

Then, in January a very generous teen planespotter saw me “shooting” with my iPhone, and said he had an old Canon Powershot SX60HS he said he could give me.

I was over the moon. I learned how my camera worked and began shooting even more. Below is the first photo I took with my new camera, showing off the zoom and detail I could get of the John Wayne Airport ramp under a Delta A319 from so far away.

With my new camera, I learned how to frame, shoot manual, and adjust my settings according to the light. I was getting more serious about shooting certain planes, working when I wanted to go to the airport; around what planes were coming in and when, and what spots I would shoot them from based on which runways they would use to land. 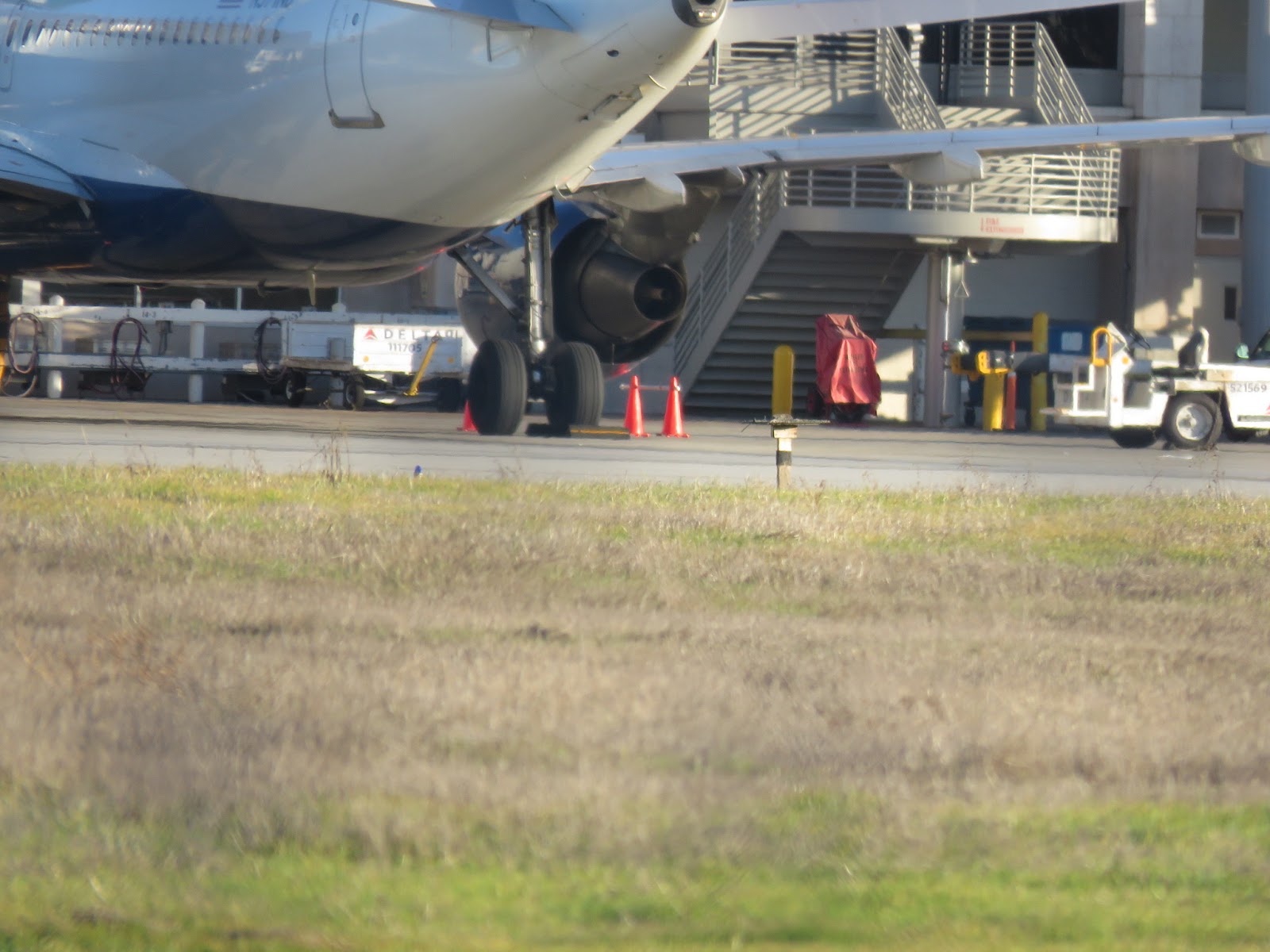 Over the course of 2019, I was now getting sharp, detailed RAW format photos. I knew which lenses to use for which spots, and my new camera like the back of my hand. I learned how to pan at sunset, and take long exposures once it got dark, but I was always looking forward.

That October, I purchased a slightly used Canon 80D. The 80D had been my dream DSLR for a while; it delivered incredibly sharp photos but was not too complex. It was a good step up from the SL2.

I now have the Canon 100-400L II lens, and it works great paired with the 80D. My equipment has been a big part of who I am as a photographer, and it has helped me grow my passion into something more serious.

All about The Camaraderie

If you are reading this and still taking pictures with an iPhone, do not stop. You do not need a camera to be a planespotter. It is about the love and passion for aviation, which is what is next on my agenda.

For me, more than anything, planespotting is about the camaraderie. Sure, it is about getting cool, rare, special liveries or government jets, whatever you want to chase as a planespotter.

However, it is the people you are with that make it fun. In SoCal, there is no shortage of planespotters, and I talked to some of my close friends, Devyn and Ryan, about their experiences planespotting at LAX.

Ryan is a high school senior who has been spotting just as long as I have. Devyn is a seasoned planespotter, who has been around the globe with his father taking videos and film photos.

In my conversations with them, they both expressed their love for SoCal’s wide variety of types of aviation. As Ryan put it, “SoCal is just a melting pot of everything from all corners of aviation, from gliders and skydiving in Hemet to military at Miramar^[Marine Corps Air Station] and March [Air Reserve Base] to experimentals and flight testing in the Aerospace Valley.”

SoCal is also home to an incredible amount of small general aviation airports and two major graveyard/storage facilities in the Mojave Air and Spaceport (MHV) and the Southern California Logistics Airport (VCV).

We all agreed that LAX is an incredible airport to grow a passion for planespotting. It is so not just because of the incredible locations but how you can drive around LAX and see all the cargo being shipped out on trucks.

It is great to see the security companies (we tend to stay away from them as planespotters) and even to drive past the maintenance facilities for each airline.

There is so much business around LAX, it opens your eyes up to so many more career options in the industry than just Pilots or Air Traffic Controllers.

The Flight Path Museum, which sits airside on the south cargo ramp, is a great place to learn the history of LAX. It covers even back to a time where Burbank, about a 40-minute drive north when it was a busier airport serving SoCal. There is so much to soak up as an aviation enthusiast in LA.

All those career options aside, another thing Ryan, Devyn, and I share is the fact our hearts are set on becoming Airline Pilots. After a 15 year hiatus from an interest in becoming a Pilot, Devyn is now a private Pilot and looking forward to flying for the airlines in a few years.

Ryan and I are yet to hit that milestone, each of us slowly building hours to get there someday. In SoCal, the aforementioned plethora of general aviation airports offers a wide range of places to learn to fly.

A Planespotting Tradition Shared by Generations

For all three of us, our love for planespotting was passed down from our fathers taking us to the airport to watch planes and letting our passion grow.

For Devyn, it was this: “My dad took me to the airport one day in 1996 after school, handed me a pair of binoculars and we just hung out at the park by In n Out on Sepulveda for a couple of hours and honestly, that’s really the origin for me.”

His father had been videoing planes long prior and still records with his camcorder at LAX.

As Devyn recalls, planespotting was much different pre-9/11, back when he started shooting with a film camera. I was interested to hear about what it was like, especially because I was not born yet.

Before the attacks “you could get right up to the perimeter fence… and sometimes security would show up saying ‘we got a complaint you guys were in a “no trespassing” area’ and once they saw we were just taking photos and enjoying the planes they would understand and chat, and leave us alone…Afterward, we would get kicked out of ‘no trespassing areas” more often, and we didn’t go to the airport for about a month after it [the attacks] happened” said Devyn.

This is Devyn shooting his favorite aircraft, the 767-200, on a fun day of airside spotting 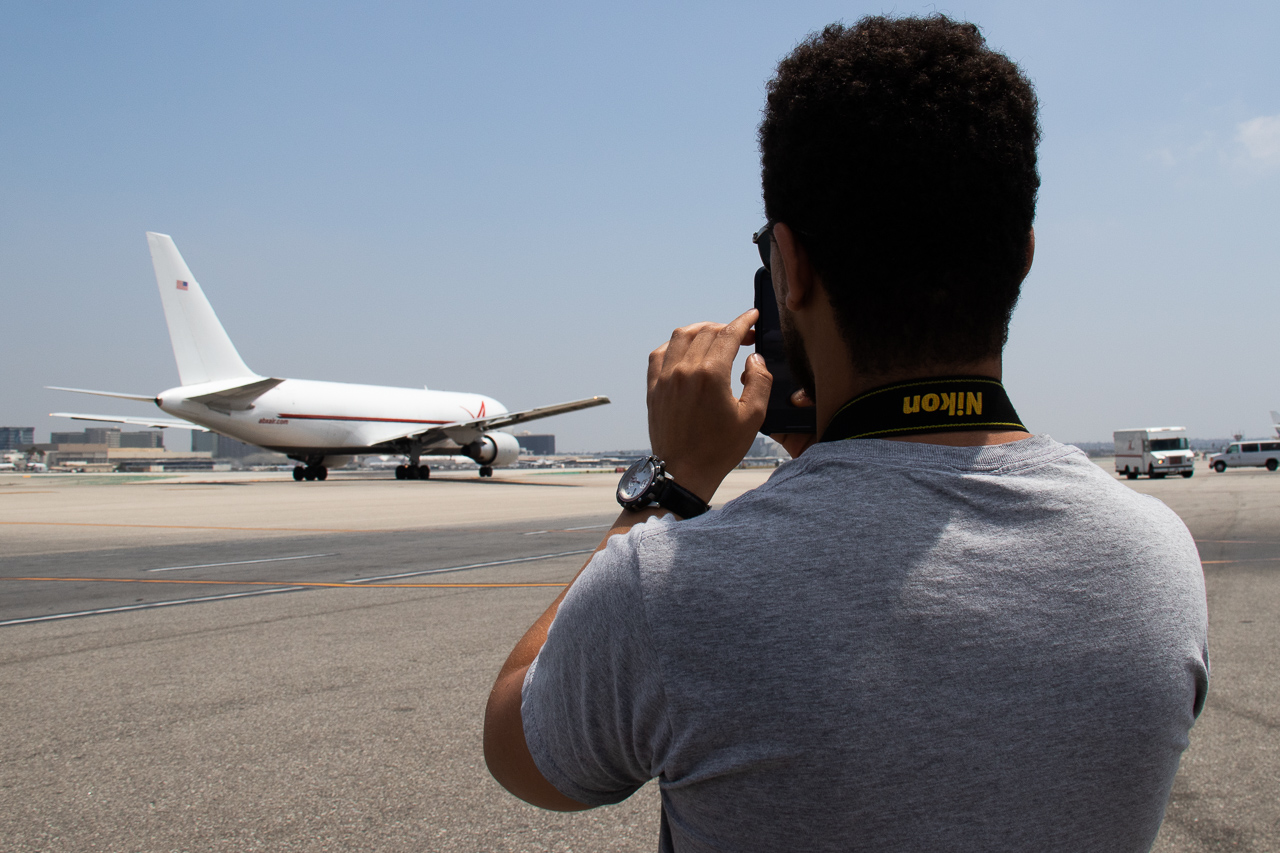 The Mindset of a Planespotter

As planespotters, we are always checking Flightradar24, worrying if the light will be good when a certain plane comes in, or what runway it will land or take off on, or hoping the weather will be good if we go on a trip somewhere.

There’s a lot of subconscious self-worth associated with what planes you have seen, if it was in good light, or if you have flown a certain plane, etc. And it is a real bummer when the shot does not come out the way you would have liked it.

In the end, it is more about the friends you make all around the world, getting to chat with like-minded people at events or when there is a plane so important you know people are going to pack your local spotting location, sharing photos and experiences on social media.

I love planespotting and plan to do it for as long as the course of my life permits. I would not have chosen a different place to grow up planespotting. There is an airport here that will satisfy your interests whether it is commercial, private, military, cargo, or retired and scrapped.

It started out as something I did on the weekends when I did not have too much homework. Now, I travel the country meeting people and chasing planes. So to answer the question at the beginning, I plane spot because it is a way to channel my passion for aviation all the while traveling the country and meeting like-minded people.

And yes, the 14-hour days might sound boring, but believe me, those are when they are the most fun.

From Smartphone Pics to Helispotting in 5 Years

I thought I would end this essay with something interesting: my first spotting photo and my most recent one, side by side.

For my most recent, I went up in a helicopter at 1,500 feet. You could imagine how it would have looked on an iPhone. In 2015, I would have never thought I would want to go up in a helicopter just to take a photo, but it goes to show the people and environment that surrounded me continuously allowed me to grow my passion.

The time I have spent and will spend learning about aviation as a photographer is invaluable to me and something I will always remember. But like I said, I am always looking forward, and like so many of my fellow planespotters, I cannot wait to be a Pilot.

The Airways Project #6: The Historical Background of Modern Cabin Safety

The Airways Project #4: Once Upon A Time, There Was An abandoned Airport

Airways - June 30, 2021
MIAMI - COVID has brought changes to the travel industry for tourists and businesses alike. But as lockdowns across the world ease, how can...

EU Agrees to Welcome back US Tourists