DALLAS – Southwest Airlines (WN) Flight 1380 was a Boeing 737-7H4 that experienced an uncontained engine failure in the left CFM56-7B engine. A passenger in the window seat, Jennifer Riordan, was fatally injured. It would be the first death on a U.S. airline flight since 2009.

Eight other passengers, including at least one of the men who helped pull Riordan back in the window, suffered minor injuries. Passengers hailed Pilot Tammie Jo Shults, the Captain of Southwest 1380, as a hero. The world ate up the dramatic headlines:

“SOUTHWEST PILOT OF FLIGHT 1380 IS NAVY VETERAN HAILED FOR HER ‘NERVES OF STEEL‘.”

“SOUTHWEST PILOT, A FORMER NAVY FIGHTER PILOT, PRAISED FOR HER ‘NERVES OF STEEL’ DURING THE EMERGENCY.”

A Hero in the Making

To hear the media tell it, you would think that Captain Shults jumped in the lav to don her Superwoman cape, and then singlehandedly wrestled the crippled airliner to the ground.

The news has trumpeted with glee, for example, former Navy Lt. Commander Shults’s past swashbuckling escapades as one of the first females to fly EA-6B Prowlers and F/A-18 Hornets. Great pulp for the entertainment mill, to be sure. But, that is only a very small part of the story; tiny anecdotes gleefully doled out as morsels to an ADHD public more interested in sound bytes than the full truth behind the yoke.

There is absolutely no doubt that Captain Shults is a hero, and performed heroically that day. But, to safely fly an airliner, it takes a village. To be sure, there is a village leader, called the Captain, who ultimately calls the shots. He or she is known as the PIC, or Pilot In Command, and is, according to DOT Regulation 14 CFR 91.3 (a) “, . . . . directly responsible for, and is the final authority as to, the operation of that aircraft.”

On Southwest 1380, was it Captain Shults’s razor-sharp skills, honed by her nighttime 3-wire traps on a rolling aircraft carrier, that singlehandedly saved the ship, as the media would have you think? Or, if not, who, or what, really saved the ship, and how? What is the real story when an airliner “falls out of the sky,” to use a popular, if grossly melodramatic and inaccurate, media term? What is truly going on “behind the scenes,” as it were? Or, in the case of an airliner, in front of the kevlar cockpit door?

While the final NTSB report was not released for at least a year after the event, it appeared that the WN 1380 incident involved some fine leadership and CRM (Crew Resource Management) as well.

To me, the ATC radio transmissions are particularly telling, and give the impression that Captain Shults and First Officer Ellisor were working closely together as a team to bring the flight to a safe conclusion. At certain times, it is First Officer Ellisor talking and replying to ATC on the radio, but at other times, we hear from Captain Shults—especially when it is a particular question that requires a command decision.

This tells me that, after their emergency descent (a rapid dive to a lower altitude, due to cabin depressurization), Captain Shults may have initially assigned Pilot Flying (PF) duties to First Officer Ellisor, while she managed the issue (Pilot Monitoring—PM).

This is SOP for many airlines, and, in this airline Captain’s opinion, the best way to handle most emergencies.

Southwest Airlines SOP, however, does require the Captain to take control for landing during a single-engine event (unless there is an issue with the Captain’s flight controls), so Captain Shults most likely took back PF duties for landing.

Also, in an emergency, the PF would take up most radio calls as well—until a decision needed to be made by the PIC. Thus, we hear Captain Shults interjecting at times. Again, this tells me that the two were most likely working together as a tight-knit team, communicating closely, with both Pilots constantly in the loop.

While we have yet to hear the details, I speculate that First Officer Ellisor was at the controls, at least prior to landing, post-engine loss. So, while the papers love to imply that it’s Captain Shults’s night carrier landing experience that allowed her to safely fly and land the plane, she may very well not have even touched the controls until the short final.

But, that’s a major point we’re trying to make here: on any airliner, both Pilots are equally qualified, skilled, experienced, and trained to safely fly and land the airliner.

For example, on American Airlines Flight 550, an A320 flying from PHX (Phoenix) to BOS (Boston), after Captain Mike Johnston suffered a heart attack, the First Officer took over, diverted to SYR (Syracuse), and landed safely.

Sadly, Captain Johnston died, but even so, First Officer Stackelhouse, a civilian-trained Pilot with over 16,000 total flight hours—10,000 of them in the A320 alone—had no problem safely landing the plane on his own.

Landing a plane, even a crippled one, is somewhat SOP for any airline Pilot—as it should be. At this level of the aviation game, all Pilots (and “Co-Pilots,” if we must use the term), whether coming from military or civilian backgrounds, are plenty experienced at manipulating the controls and handling the emergency at hand.

The next time you fly with us, on whichever airline you choose, take comfort in knowing: all Pilots up front are completely experienced, trained, and qualified to be there for your safety. And, by the way, your Cabin Crew has been highly trained to perform their duties in an emergency as well.

Yep, we got your back!

Once again, kudos to Captain Shults, First Officer Ellisor, and the gallant cabin crew aboard Southwest Flight 1380. And, our deepest condolences and sympathy to the loved ones of the lost passenger, Jennifer Riordan. 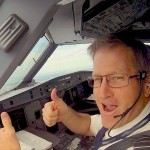 contributor
Airbus A321 Captain with over 22,000 flight hours, and 37 years flying for a major US airline. Plenty of experience in Alaskan and Caribbean skies, and popular aviation blogger and author of nine books. Scored Amazon's "Top 100 Breakthrough Novels" for "The Last Bush Pilots."