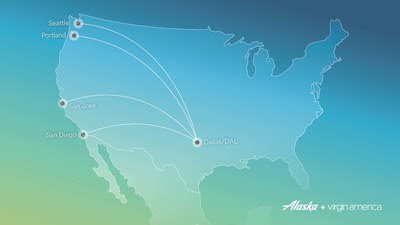 “These new routes offer Dallas business flyers complete West Coast utility from one of the fastest growing corporate centers in the country, one that is home to 54 Fortune 500 companies,” said John Kirby, Alaska Airlines’ vice president of capacity planning.

The four new routes will be flown using three-class jets. The Embraer 175 jet, operated by SkyWest Airlines, will fly daily to Portland, San Diego, San Jose and Seattle. One of the two daily flights to Seattle will be operated by Virgin America using an A320 family aircraft. All guests flying the new routes will enjoy Free Chat, free movies, premium food and beverages, Wi-Fi and advance seat selection.

On Aug. 27, three-times daily service to New York’s LaGuardia Airport will operate using an E175 and increase to four daily flights on Oct. 28.

Starting Feb. 18, twice-daily service to Reagan National Airport will also be replaced with an E175.

The third daily Love Field-Washington Reagan National daily trip will continue to be operated by Virgin America until March 11, when SkyWest takes over the evening flight. As part of these schedule changes, Virgin America will permanently exit Love Field-Las Vegas on Aug. 26.

“Optimizing the fleet and matching the right plane to the right market to is one of the key benefits of our merger with Virgin America,” said Kirby. “Prior to merger, Virgin America lacked a regional aircraft to take advantage of mid-sized routes. The fuel-efficient E175 jet has the same amenities and features of a mainline jet and is perfectly suited for Love Field.”

Qatar Airways A380 to Remain Grounded for Two Years

Cathay Pacific Expects Passenger Traffic to Remain Under 50% through 2022

Qatar Airways A380 to Remain Grounded for Two Years

Cathay Pacific Expects Passenger Traffic to Remain Under 50% through 2022

Former Pan Am Pilots Could Claim Millions over Airline’s Demise

James Field - September 27, 2020
LONDON - According to The Scotsman, Pan Am (PA) Pilots who lost their careers and pensions as a result of the collapse...